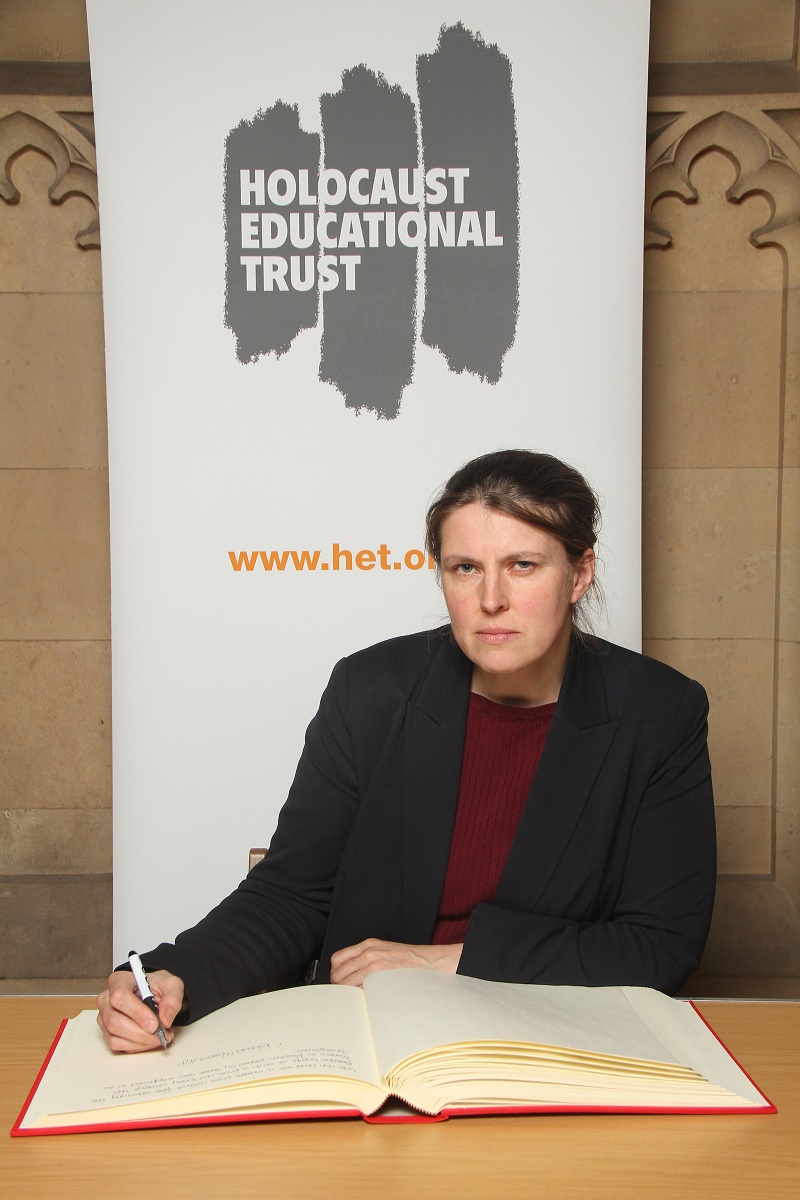 Last week Rachael Maskell MP signed the Holocaust Educational Trust’s Book of Commitment, in doing so pledging her commitment to Holocaust Memorial Day and honouring those who were murdered during the Holocaust as well as paying tribute to the extraordinary Holocaust survivors who work tirelessly to educate young people today.

Saturday 27 January marked the anniversary of the liberation of the Nazi concentration and death camp Auschwitz-Birkenau, the site of the largest mass murder in history.

In the lead up to and on Holocaust Memorial Day, thousands of commemorative events arranged by schools, faith groups and community organisations took place across the country, remembering all the victims of the Holocaust and subsequent genocides.

On Sunday 29 January, Ms Maskell made a speech in York at the Holocaust Memorial Day Civic event. The theme for this year’s commemorations is ‘The power of words’.

As I stand up in the House of Commons and ask questions on behalf of my constituents, I want answers. I want the truth.

I normally get some pre-written reply, written by a civil servant based on a prediction of what I may be asking, and delivered by a Minister with no thought as to why I may be asking my question or why I require an answer -; no matter what I ask, a line will be delivered to position the Government according to its pre-set narrative.

The answer boasts of Government achievements, talks about all the things that Government are doing -; we hear the same lines time and again which normally have no relation to my enquiry and ignores the needs of my community.

I get no chance of coming back to further my pursuit for answers, so the Government’s platitudes just hover in the air.

Prime Ministers Questions is no different -; we scream for answers to the questions asked, we call out over each inaccuracy made, and when the statement is made by the Prime Minister her word is final.

We don’t want spin or soundbites; we just want the truth.

In 2016, the nation faced new depths in witnessing political propaganda. Those that spoke truth were never heard. Just those who put the extremes -; ‘remain’ talked of the country falling out of orbit, while ‘leave’ propagated pictures of a new utopia of little Britain, back in control of its own destiny, and let us not forget that £350m for the NHS.

But under the headlines, a far darker message was being pushed into our minds.

Those people who had been living as our neighbours but by some fate were born elsewhere, or maybe it was their parents or grandparents, did it really matter? -; they were here just stealing our jobs, jumping to the front of the housing lists, and swanning around on benefits that we were all paying for.

It must be true, as we struggle to get a decent job, or have our housing needs met, or to pay our bills. This pain is real, but its origins have been totally displaced from a failed Government to those more vulnerable than ourselves.

Not only that, but no matter where people have originated from, we are told that they were undercover agents for converting the nation to a new religion, a religion which sought to bring terrorism onto our streets.

And while the evil acts of a few have devastated communities, as did Derrick Bird in Cumbria, Michael Ryan in Hungerford or Thomas Hamilton in Dunblane, people migrate because they have no choice and are seeking refuge as mums and dads, and sons and daughters, just longing for an ordinary life of unity and peace. With the same needs as any one of us; the same hopes and aspirations.

Propaganda, all because the system is failing too many while at the same time we see the biggest mass movement of people since the second world war, when the Jewish Community were seeking a place of refuge to escape Hitler’s death camps.

But let us not forget why people are on the move:-

Climate Change:- whether famine or floods -; nations devastated, unable to yield a crop or the one they have washed away -; because we, here in Britain are quite prepared to pollute the environment and have been since the industrial age, to burn energy, and lead the lifestyles of our choice -; no matter the consequences.

Exploitation:- from the slave trade when we shipped people to labour in the cotton fields, to the sweat shops -; where we casually purchase clothes made in the most shocking conditions -; we have abused our power to impoverish others.

Conflict:- frequently caused by climate change -; let us not forget how the Syrian conflict began -; the crops failed and people were forced into the urban areas which became overcrowded and tensions soared.

And we must also remind ourselves, how the brutality of Saddam Hussein, was addressed -; not through a managed process, but to my absolute shame, by our Government in the pockets of the US, going to war against the Iraqi people. Based on, yes, propaganda. Hans Blix, the UN weapons inspector after his diligent work declared that there was no nuclear programme in place, and yet, based on what was classed as an A-level standard piece of homework, the Prime Minister convinced himself and his Cabinet that they should take to war.

A million of us marched -; we were ignored, and the most complicated political relations were polarised.

But all these factors -; climate change, exploitation, conflict -; our actions and our inactions have resulted in people uprooting to survive -; to get food and water, to better their chances, to flee for their lives.

The problem has been that we have been all too ready to point the finger at the problem, rather than at the cause. To scapegoat those we have exploited and harmed -; rather than to beg their forgiveness.

We live with this propaganda, because to face the truth is too big a burden for us to carry. It is far easier blaming the next weakest person in line.

We need only look at the tabloid headlines or the TV listings to see how editors try to make us feel self-righteous.

The headlines which seek to make us superior from ‘them’. To make ‘them’ different to ourselves, less significant and the cause of the problems we see, our problems.

Nigel Farage said it all on his billboard ahead of the referendum -; Breaking Point -; as he depicted a stream of terrified, hungry, tired people fleeing from war and sights that none of us should ever witness, leaving their jobs, their families who couldn’t make the journey, perhaps losing some in the dangerous crossing, not knowing their future, but just hoping that people would receive them and take compassion on them.

Yes -; they were at Breaking Point -; but not as he meant.

The haves, and have nots. Them and us.

The 1930s in Germany were no different. Inequality blighted society, communities were struggling and a leader rose to provide a new solution. As he took charge he highlighted the problem -; not sitting with Government, but with others, with the Jewish community, with communists, with disabled people -; others.

He established the Ministry of Public Enlightenment and Propaganda under Joseph Goebbels, to ensure that his message was communicated through art, music, theatre, films, books, radio, educational material and the press.

The ministry focus as Goebbels said “consists in winning people over to an idea so sincerely, so vitally, that in the end they succumb to it utterly and can never escape from it” “Propaganda is not an end in itself, but a means to an end. If the means achieves the end then the means is good.”

His means were extreme, he groomed a nation to believe in the ‘The Final Solution’ and today, we pause to reflect on the shear brutality of the Holocaust.

This post-truth era is a dangerous period, once again, in our history.

Instead of the pretence that all is working for good, we need some honesty, some humility, some remorse.

I have always loved, and been challenged by a few lines in Matthew’s gospel.

“Do not judge, or you too will be judged. For in the same way you judge others, you will be judged, and with the measure you use, it will be measured to you.

We may not have control over the headlines, but we do over our own actions and thoughts.

Do we ‘other’ people? Are we bystanders? Or do we take the step to speak truth to power -; wherever that power lies?

Propaganda will only propagate if we let it.

Instead let us propagate a new honesty and humble ourselves in the reflection of the six million who paid the ultimate price.