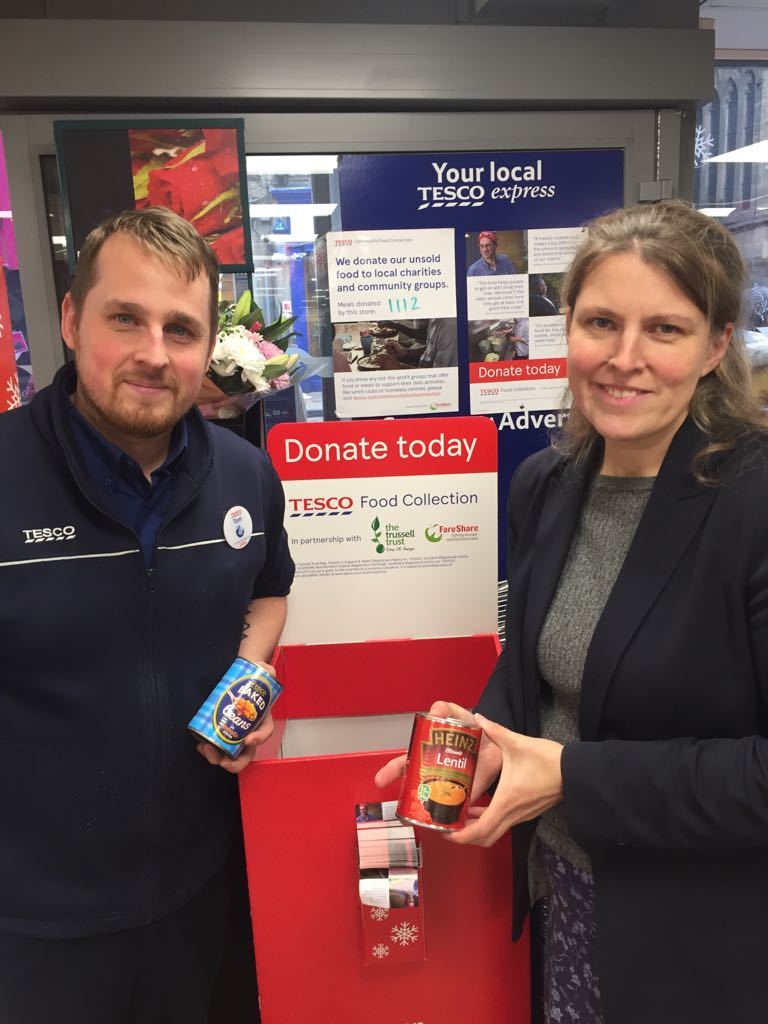 Today, 2 December, Rachael Maskell, MP for York Central, will join people collecting food for the Trussell Trust outside a branch of Tesco in York.

From Thursday, November 30 to Saturday, December 2, more than 2,600 Tesco stores across the UK are taking part in the annual Food Collection, which encourages shoppers to donate long-life foods to help charities FareShare and The Trussell Trust’s foodbank network to give food and support to people who might otherwise go hungry this Christmas.

The MP is visiting the Tesco store in Low Ousegate to support the appeal, which last year collected 3.6 million meals for people in need.

The food donated to foodbanks in The Trussell Trust’s network is given in emergency food parcels to people referred because they cannot afford to feed themselves and their families. Food donated to FareShare is distributed to charities and community groups who use it to provide meals for vulnerable groups such as isolated older people and those in homeless shelters.

More than 43 million meals have been donated to the food charities by Tesco customers since the scheme began, and the supermarket is hoping that shoppers will be just as generous this year.

“The Trussell Trust do a fantastic job distributing food to needy families all year round. However, it makes me very sad that the UK, the sixth wealthiest country in the world, has families dependent on food parcels whilst so many others are over indulging over the Christmas period and waste is at a high. The inequality in York is so marked and we have households in which people have to decide whether to spend their money on food or put their heating on. Many cannot afford to do both. If anyone is struggling to pay their fuel bill they should first contact their supplier to request help. If they do this and there is still a problem, they should get in touch with my office and I will try to help.

“Food Bank dependence is way too high. In York there have been 1161 referrals to the food bank this financial year. This has fed 2877 individuals in need and of these 1750 were adults and 1127 were children. I am concerned that the situation will get worse as universal credit kicks in more people are pushed in to poverty. It is clear the Conservative Government’s policies are failing so many people.

“I am grateful to Tesco for organising the collections for the food bank and it is heartening that there are so many generous people donating food. The Trussell Trust do an amazing job and I urge everyone to support them at Christmas and throughout the rest of the year.”

“If you’re heading down to your local Tesco today please do remember to donate a can or packet to the food collection at the front of the store.”

“For charities doing their best to feed some of the most vulnerable over the Christmas period, these donations make a huge difference.

Samantha Stapley, Operations Manager for The Trussell Trust said: “Trussell Trust foodbanks across the country will be doing all they can to provide emergency support so people don’t go hungry – but to make sure we’re prepared for what could be our busiest December yet, our network needs your support.

“During every Food Collection we’ve been humbled by the staggering generosity of Tesco customers, store colleagues and volunteers, and as we look to the start of the tenth collection, we would love to have your support once again. Your generosity will help stop hunger this Christmas.”