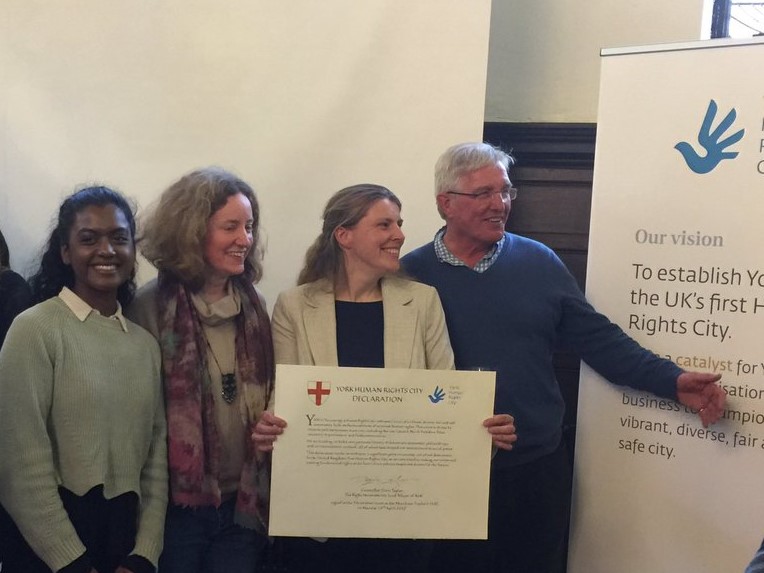 On Monday, Rachael Maskell MP for York Central attended the declaration to make York the first Human Rights City in the UK.

From Bandung in Indonesia and Graz in Austria to Richmond, California in the US and Thies in Senegal, residents and authorities are looking at international human rights and putting them into action in their own communities.

Becoming a Human Rights City could mean prioritising high quality health care for its citizens, promising brilliant education for all its children, working to eliminate homelessness or challenging racism. The details are up to the people who live there.

To mark this historic event Ms Maskell gave a statement of support prior to the official declaration.

In the statement, Ms Maskell highlighted how York, as a city, has such a proud history in furthering the rights of others, in education, health and through the innovative work of Joseph Rowntree and his family.

Ms Maskell also spoke of how in the last century York was a place where many sought safety in the Second World War and that as a city, York has provided sanctuary for those fleeing conflict in Kosovo and the horrific chaos of war now raging in Syria.

Ms Maskell also highlighted how going forward we must strive for greater social justice, advancing the law and protecting the UK and European frameworks for advancing Human Rights.

Rachael Maskell MP for York Central says:
“I am really honoured to be part of this historic moment when York becomes the first Human Rights City in the UK. York, in becoming a Human Rights City embraces the vibrant diversity of our community and I am delighted that we are able to formally celebrate this today.

“At a time when rights are being restricted economically and socially, through poor employment, in education, in health, in access to justice or simply in access to personal dignity -; we all have a responsibility to speak out.

“Going forward, it is the duty of everyone to ensure that the values declared this evening are fully embraced and that we all continue to fight for greater social justice.

“Today is a proud day for our city and I would like to thank everyone who has been involved in this resident-led initiative to make York the UK’s first Human Rights City. There are several ways to get involved and I would encourage everyone to pledge their support at www.yorkhumanrights.org and also join the York Human Rights City mailing list, which includes upcoming dates and events.”