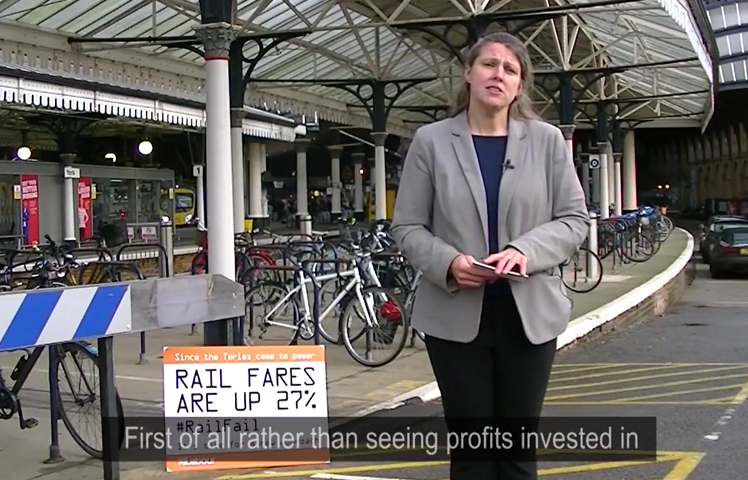 Labour’s plan is to bring railways into public ownership, keep fares down by running services on a not-for-profit basis and invest in our railways -; putting passengers first.

Since the Tories came to power, rail fares are up 27%. That’s a rise three times higher than wages and some season tickets are up by over 40%.

Under-investment is leading to chaos and cost to commuters. We were told that higher fares would fund investment, but vital projects to improve reliability have been delayed for years. Passengers are paying even more to travel on increasingly overcrowded and unreliable trains.

The Tories can’t admit it, but rail privatisation has been a failure. Every year, millions of pounds which could go on improvements is handed to shareholders and rigid contracts make it harder to deal with overcrowding.

Labour will put passengers first, bringing rail into public ownership. Routes will naturally return to public ownership as private contracts expire, meaning profits can be re-invested to improve services and hold fares down.

Rachael Maskell MP says:
“Train ticket prices are still rising three-times faster than the growth in wages. Since 2010 we have seen a 27% increase in ticket price, the season ticket price for York to Leeds is now at £2,232, almost £500 more than in 2010.

“Labour believes that rail should be seen as an affordable, sustainable form of transport; and we would ensure that it is fully integrated into a regional transport and environmental plan, linking buses and trains and tackling congestion and air pollution.

“Labour will put passengers first, bring the railways into public ownership and keep fares down by running services on a not-for-profit basis.”

For the video of Rachael talking about Rail fail – please visit: https://youtu.be/GBfgSYOFbME