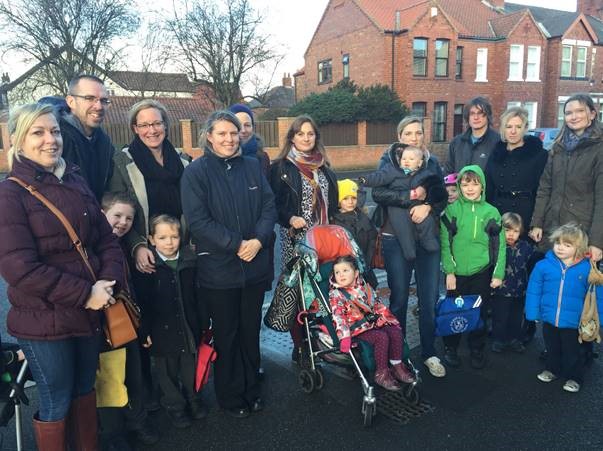 Rachael Maskell MP and Micklegate Ward Councillor Julie Gunnell are urging the Council’s Executive Member for Transport and Planning to listen to parents and residents when considering the responses to a public consultation about planned road changes stemming from the redevelopment of the former Terry’s chocolate factory.

Earlier this year, Rachael and Cllr Gunnell were approached by York mum, Katy Sawyer and some of the parents from Knavesmire Primary School who raised their concerns about the safety of the Bishopthorpe Road/Campleshon Road area for children en route to school. Mrs Sawyer then organised a petition calling for a new crossing and the MP and Councillor helped to collect signatures for this. The petition has been signed by approximately 170 people.

Rachael Maskell MP says:
“Earlier this year I met Kate Sawyer and parents and carers from Knavesmire Primary School. They told me they had concerns about the safety of the crossing on Bishopthorpe Road. I visited the site to see the dangers for myself and to look at ways of tackling the problem. I then wrote to the Council to try to help. Too many children are killed or injured on our roads and we need to ensure that the places where they cross are as safe as possible.

“Much more needs to be done to make crossing the road safe. This area is already very busy and the volume of traffic will increase because of the development. The Government’s National Planning Policy Framework states the importance of neighbourhood planning and for members of the community to be involved in decision making. In this case there is a need to take road safety in to account. This is a huge opportunity for the council to work improvements to road safety into their plans and the Executive Member should recognise this. The Executive Member needs to listen to parents and residents in the area and take their concerns on board. There should be no compromises when it comes to children’s safety.

Councillor Julie Gunnell says:
“I am concerned by the absence of any exploration of safety measures to help pupils crossing the busy Bishopthorpe Road to Campleshon Road on their way to Knavesmire primary school. I have campaigned about this with Rachael Maskell in the past and we have both helped collect signatures on the petition. We will continue to press for action to address these concerns until there is a safer route for children.”